Reflecting on my meal at Heyday, the new restaurant on Spear in downtown SF opened by Chez Panisse Cafe alums, it occurred to me that this page would more accurately be named “Meat Oakland.”

When I was a kid,the vacations my family took were always road trips. Each morning of those trips, facing endless hours of counting Interstate signs and tired already from begging my parents to let me swim through the slimy flotsam in the hotel pool just one more time, I directed my best whining at the need for breakfast to be at Denny’s. It had to be Denny’s. Because in the late 60s and early 70s that was the only place I could reliably get a hamburger at 7:00 am.

I can’t really be sure if my carnivorism is due to nature or nurture, but it is a fact of my gastric identity and always has been. Imagine the difficulty I had navigating the bleak vegetarian times of the seventies and the carbohydrate happy eighties. Shudder. Dark days indeed.

But the only thing that remains constant is change and the triple whammy of Atkins/Paleo/gluten shaming has resulted in a culinary climate that speaks my language. Whenever I am contemplating my next meal, the question is usually “where can I get tasty protein?”
(Which is not to say I don’t love vegetables. I do. As a side dish or creating a bed for my meat. Veggies are great, veggies are fine. I especially love the current superstars like kale and brussels sprouts. But animal protein is the centerpiece of all my meals. Anything else is a snack.)

I was excited to hear about Heyday, the Chez Panisse Cafe has been my favorite restaurant for 30 years. I knew the quality of food would be a cut above. Here is the set up at Heyday: There are a number of salads and sandwiches (half sandwiches really). You may get one item for $6, 2 for $10, or 3 for $14.

My first impression on walking into Heyday was “where is the food?” The only protein is in the half sandwiches, and even in those it is in condiment portions. I faced a dilemma. I did not want two “sandwiches” (1/2 sandwiches) since that would be a boatload of bread when all I really wanted was more meat. So I settled for the turkey sandwich, the kale salad and the farro salad. What the fuck is farro? It is not “giving birth to a litter of pigs” as I originally thought, it is, rather, an Italian grain. Ok.

You see the photo of the plate I got for $14. There is about 1 ounce of meat on that plate. The salads and sandwich were very very good. I’m sure the food is organic and locally sourced, if you are a vegetarian or even better, vegan, this might be a real find.

…but I could not get past feeling ripped off for paying $14 for a plate of stuff that my food eats.

I enjoyed my $15 hamburger at Town Hall yesterday MUCH more. 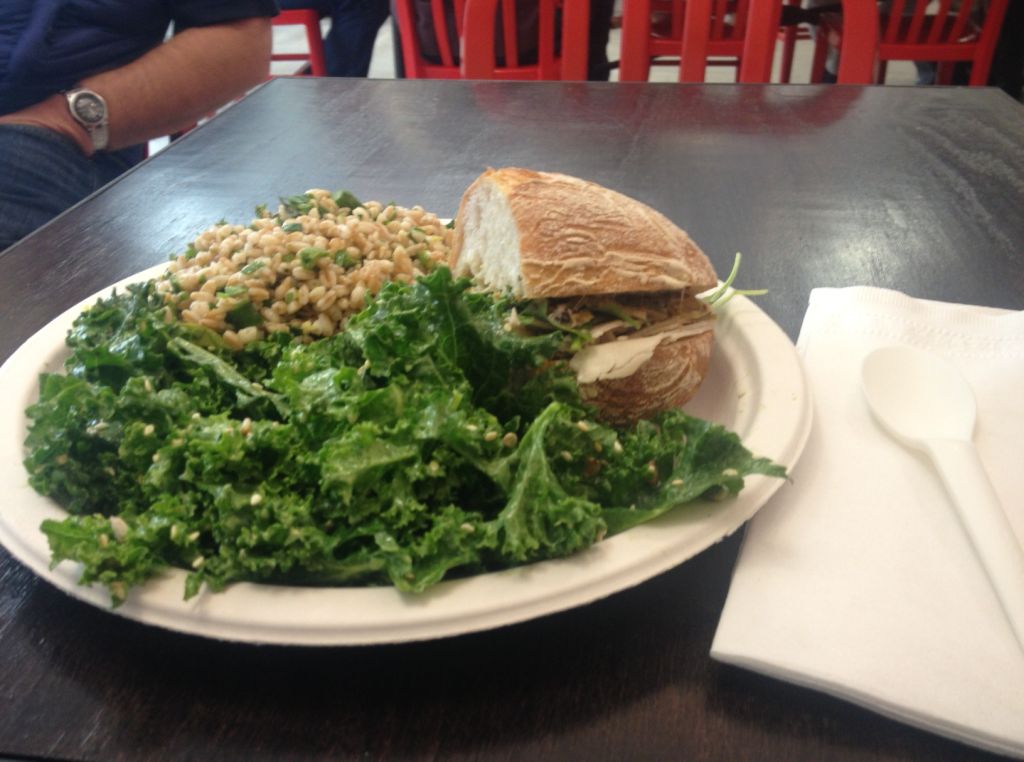 @ExpediaHelp Expedia contacted me via DM and completely resolved my issue! I still wish it were easier to talk to a… https://t.co/HoT0Of2QQN
Reply Retweet Favorite

@ExpediaHelp I need to speak to a human being at Expedia about a reservation and have been unable to. How can I talk to a person???
Reply Retweet Favorite