Flu addled, I teetered unsteadily to the microwave to investigate.   “Eewww,” I screamed.  There was a kidney or some other organ poking out of the arroz caldo (chicken/turkey rice porridge) my husband was reheating for me as a salve for my illness. He came into the kitchen grinning sheepishly, “Sorry.  I guess I didn’t get all the ‘parts’ out.”

It was a conversation rehashed in many forms during the time we were together.  As a white girl growing up in the 60s and 70s in relative affluence, I cut my teeth (literally) on prepared, often prepackaged and pre-cooked food.  He was from the Philippines.  I had Stouffers frozen french bread pizzas after school, he had Dinuguan (pork blood stew).

I have fond childhood memories of tagging along with my parents to the fish market at Spenger’s on 4th street to pick up cracked crab. It was a bustling place back then, bearing little resemblance to the version that is there now. I loved watching the fishmongers crack the cooked crab with a mallet and deftly wrap it in thick paper. We’d grab a loaf of sourdough bread and go home to a feast of salad (iceberg lettuce and Marie’s Blue Cheese dressing), bread and butter, and crab excavated from the shell with the cool little silver forks my mom only brought out for those occasions.

Years later, when my husband suggested crab for dinner, I was excited to recreate a favorite meal of my youth. On the drive home from Oakland Chinatown (the best place to get fish, he said) I heard a rustling in the back seat.  I looked at my husband.  He had that grin again. The live crab was walking around the floor of the back seat in its plastic grocery bag.  Not exactly what I had in mind. I rode all the way home with my feet up on the seat, wondering what else we had for dinner.

These are the confessions of an insecure bon vivant. The truth is, I am not an adventurous eater.

So it was with some trepidation that I went to Box and Bells.  I’d checked out their menu, and I knew that there were many things on it that would push my limits.  But the restaurant has a pedigree that can’t be ignored (it’s James Syhabout’s third Oakland spot, he also has the Michelin starred Commis and the more casual, street food themed, Hawker Fare), and many people whose tastes I generally share said it was great. 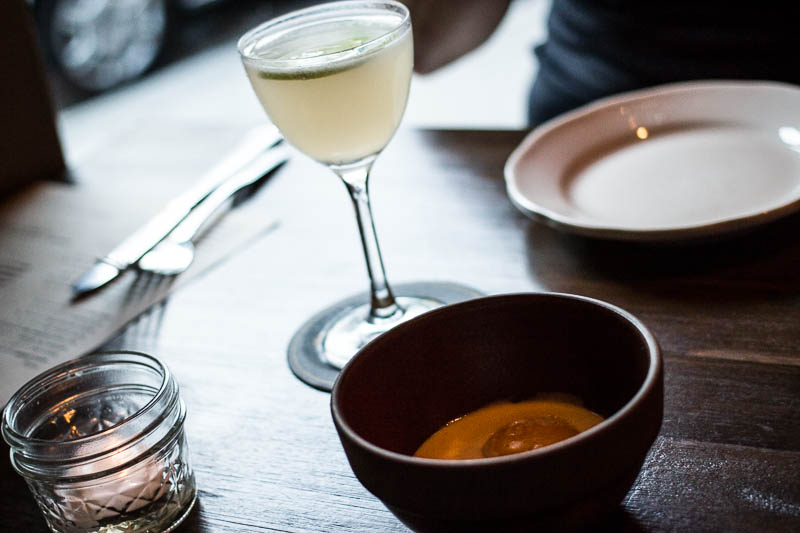 I thoroughly enjoyed both meals I had there.  There was great attention to detail in the flavors of each thing we tried.  The small plates were very tasty, and you could make a meal of those.  Standouts were the plate of ham and hush puppies, the custardy soft boiled “Commis” egg (not even on the menu the night we were there but a recommendation from our excellent server) served with smoked dates and something green (it was amazing and I am generally put off by runny eggs), the deviled eggs, and the fried chicken served with raw oyster mayonnaise. 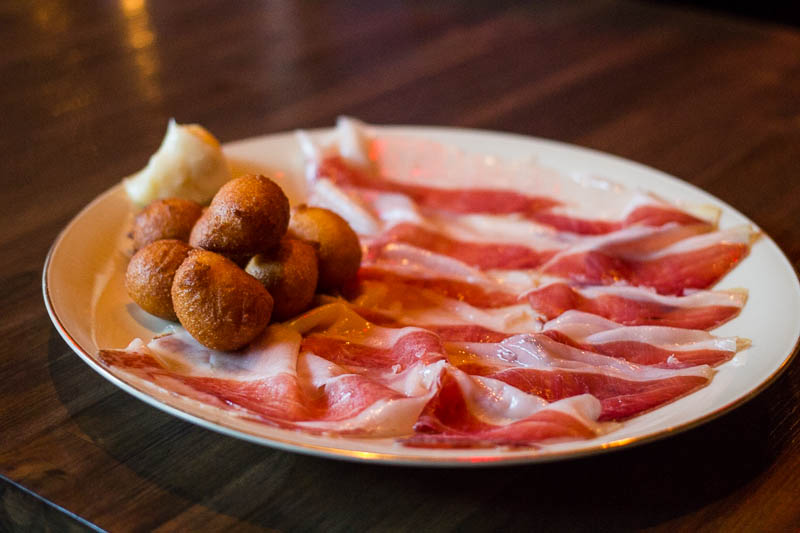 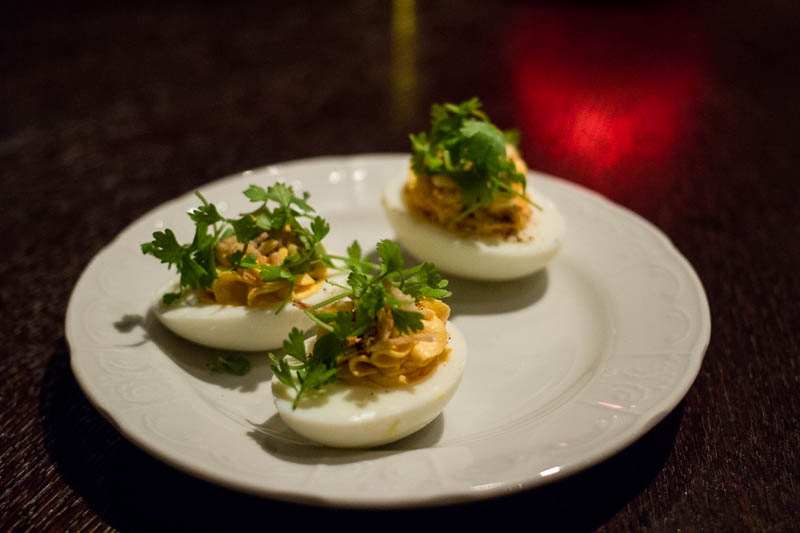 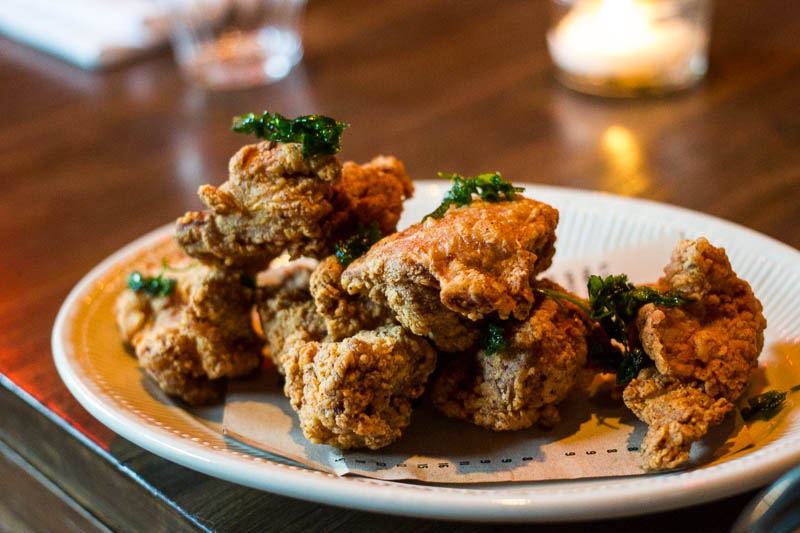 I loved the burger. It’s served with gruyere and caramelized onions on a pretzel bun.  Perfect meat to bun ratio. And it’s nice to have a bun that holds up.  The fries are thin cut and crunchy.  The half chicken was cooked to perfect tender perfection. I could eat two orders of the brussels sprouts. 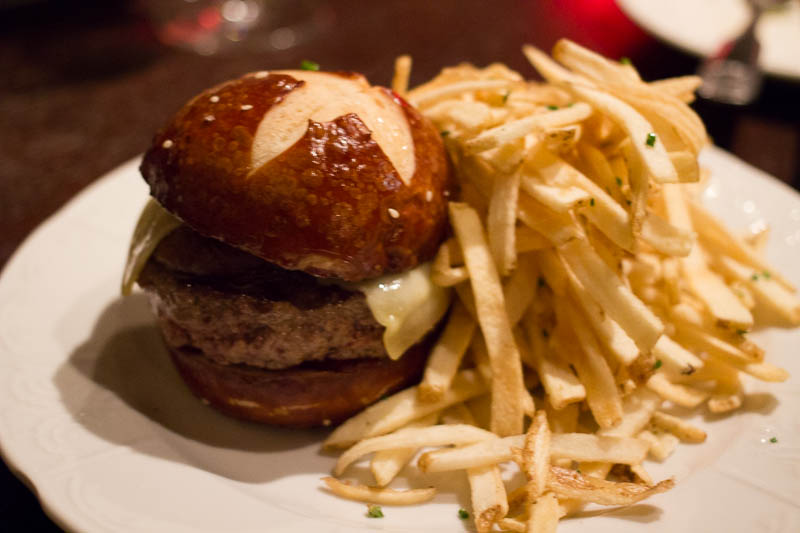 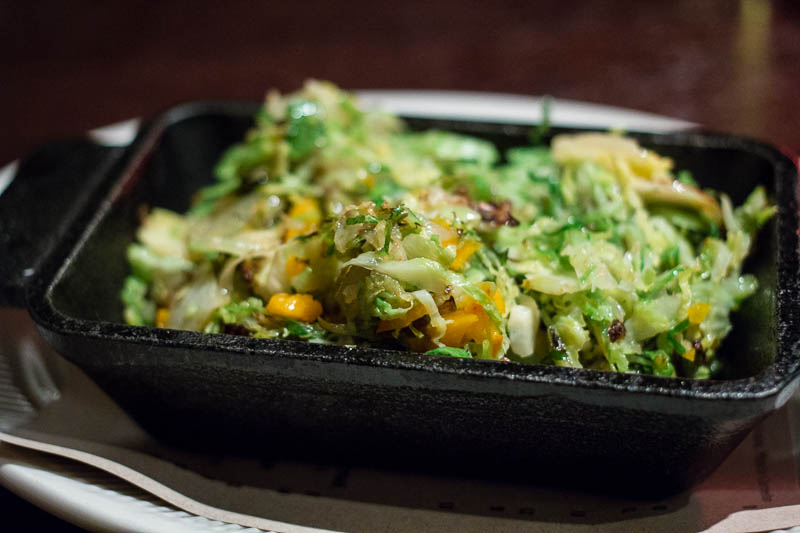 An adventurous dining companion ordered the blood pudding poutine with cheese curd and scallions…a bridge too far for me, as were the trotters on toast.  I did try my first scotch egg, which was good and a novelty but not a standout for me. 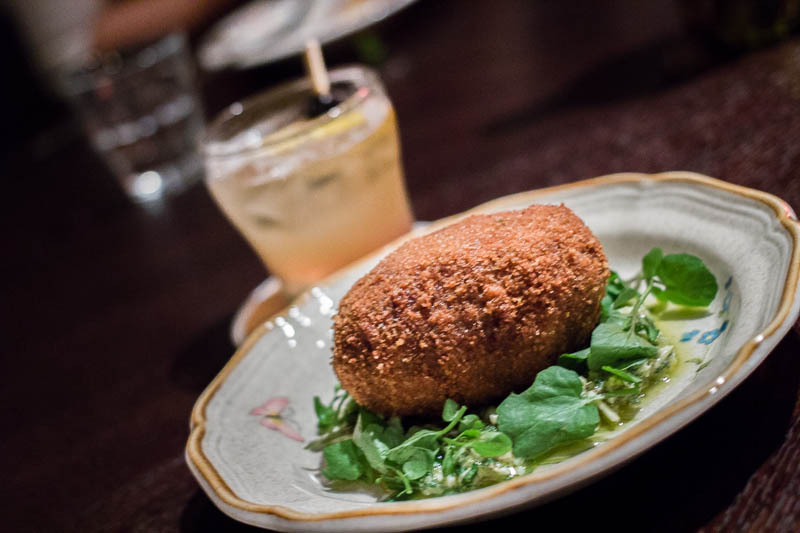 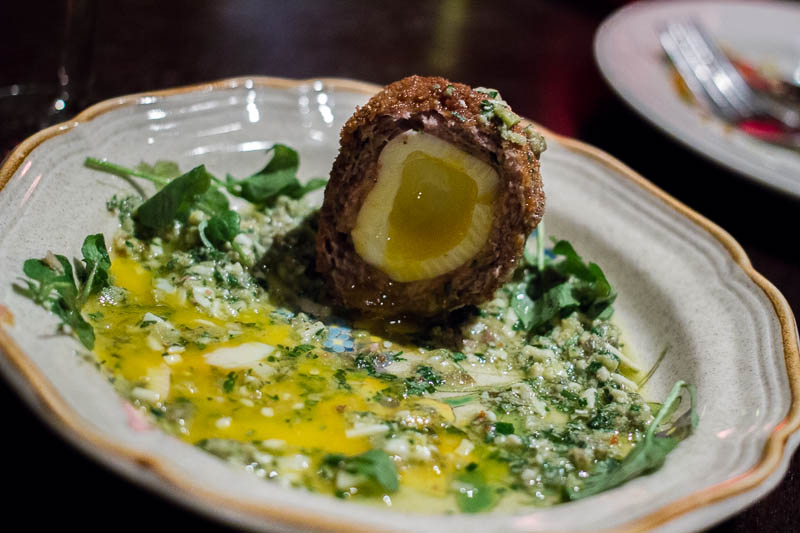 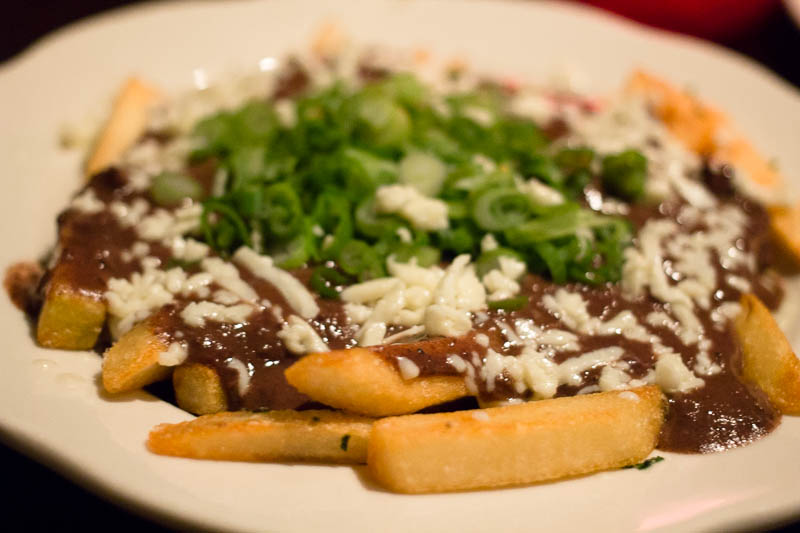 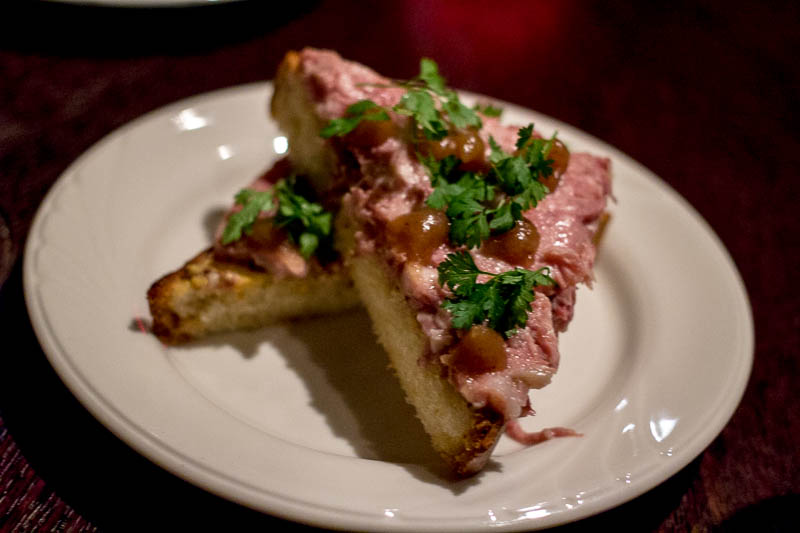 The drinks are also well crafted and tasty.   They are generally small, but quite alcoholic!  And at $10/per, they are not as pricey as some other places. 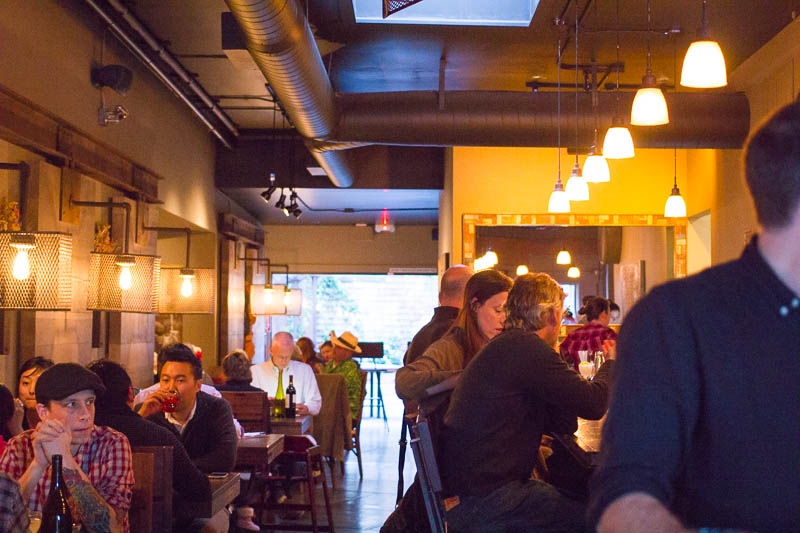 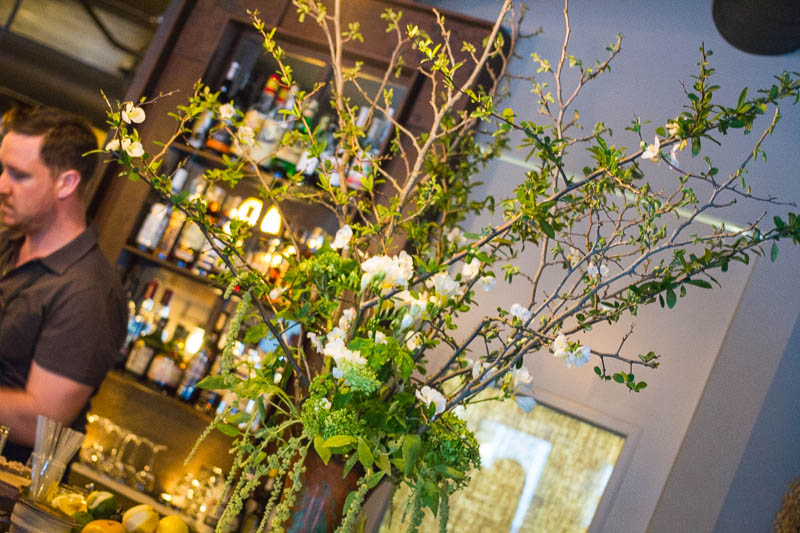 Both times I went (one was with a party of 5 not far from closing time) the service was outstanding.  The second time I walked in with a party of two without reservations and they were able to graciously seat us immediately after phoning to confirm a late reservation would not be coming at all.  Props to the front of the house on both occasions for their helpfulness and professionalism; a weakness at so many other local restaurants.  Our waitress was extremely skilled.  And they take presentation seriously. Your food may be delivered by other waitstaff or even someone from the kitchen; they care about not letting things sit.

The feel of the place is quite masculine.  So are a lot of the flavors.   I think the restaurant is best for carnivores like me,  a vegetarian would not have an easy time there. It is not cheap, dinner for two with three drinks was $130.00.  But for me, the interesting flavors, the attention to presentation, and the thrill of pushing my own boundaries elevated it above an ordinary experience. 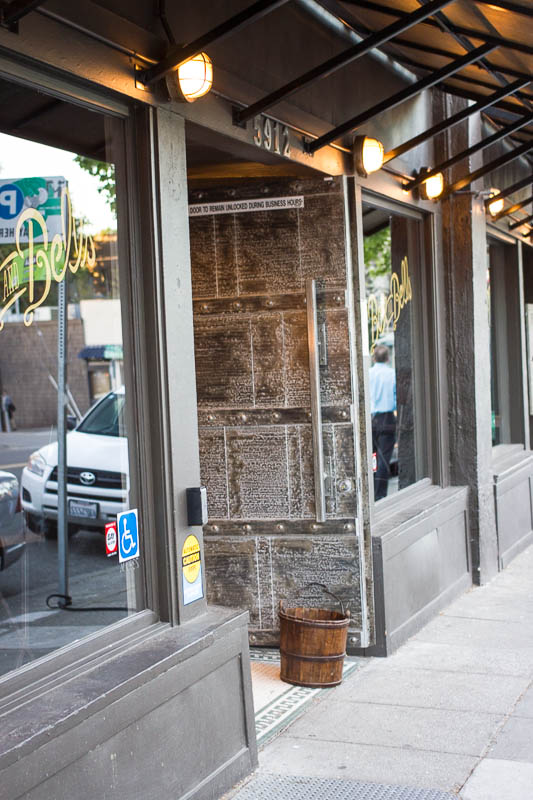